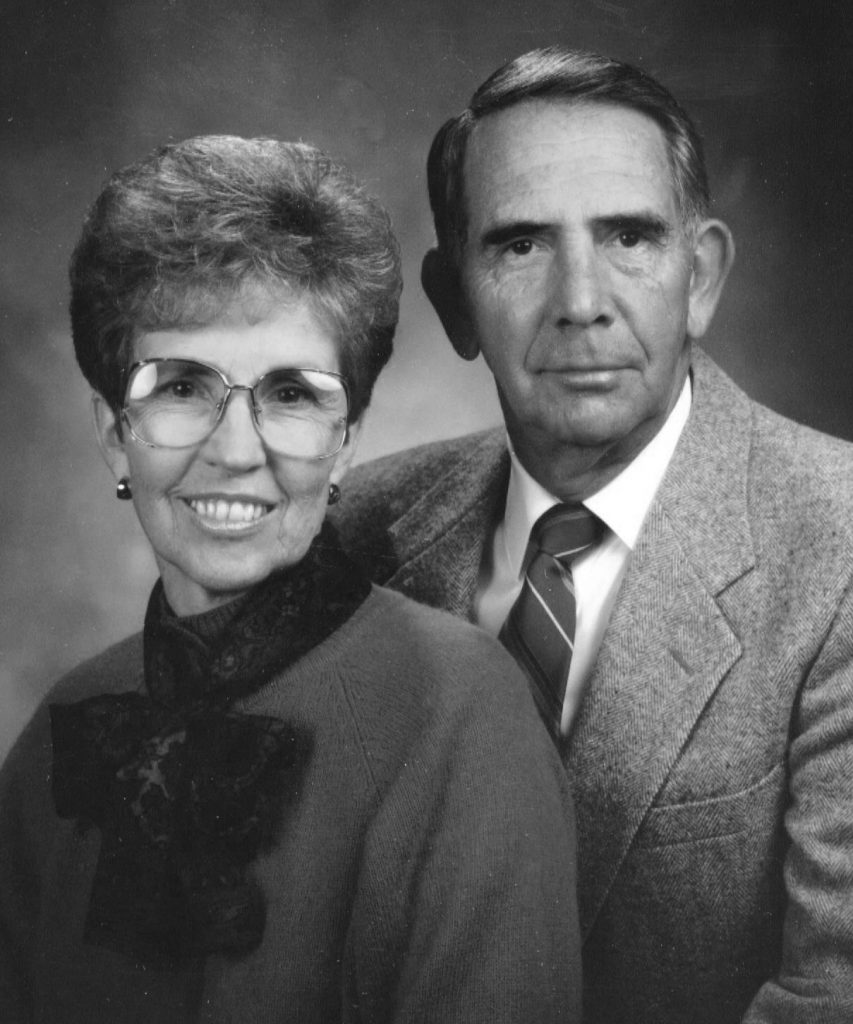 Q: Did you come here when you were five?

A: I was six when I came here from Blanding.

Q: Okay, just tell me about you.

A: I was born in Blanding, Utah. My father worked down at Indian Creek. He was the head manager on the ranch down there for a number of years when I was little. Then he bought the South Mesa Ranch there on the La Sal Mountains. It was the big mesa that you can see from Moab. We moved there two summers before we moved to Moab. We moved to Moab the night before I started First Grade. I’ve mostly lived here ever since.

Q: What building did you go to for first grade?

A: We were on Center Street. All the schools at that time were in that one building which is the old junior high now. And there wasn’t the new gym west of it then. There was the library north of it and we had study hall. Over in that building, there was the front part that was the big library and we’d go over there for study hall. But there was also a little room for the county health nurse.

Q: Was that the building that burned?

A: Yes, it is the building that burned later.

Q: Did you see the fire?

A: Yes, my husband and Glen Rickson and some of them and the football players carried books out of the library, which could have been very dangerous. Anyway in the back part of the building, in the basement, there was a hot lunch room. It was just for the students that rode busses or were from Thompson or from La Sal. The in-town kids didn’t eat there.

Q: Where did you live at that time?

A: I lived just about 2 blocks from there. It was Second North and Third East, just north of where Seekhaven is on that right-hand side. When we first moved here we rented a house, which is where the Greenwell Motel is now. There was a great big house of Goudelock’s there on the corner and they had a little house next door that they rented to us. It was like three rooms and we had six kids so we were crowded. But we lived there and then we moved a few blocks from there to across from Bob Hawks.

Q: Was he a playmate?

A: I would go over and play with his sister, who was older, but she had a dollhouse and I love to play with that. He didn’t like me at that time but I was crazy about him from the first time I saw him because he had brown eyes. All of my relatives had blue eyes and so this was really special. During the summer he would ride with his brother up at the ranch bringing their cows by. Later when he stopped coming up there, my brothers teased me and said, “He just found out what he was coming for and then he quit coming.” We went together all through high school. And then we broke up a few years and then we got together and got married.

Back to the school, we had band rooms in the front above the lunchroom on each side and then you’d go into the big auditorium. We had a nice auditorium with a big stage.

A: I was in the band, yes. I played a saxophone. And they even had orchestras at that time in the high school.

A: It was, we had a band instructor and an orchestra instructor; different people at different times.

Q: Do you remember how many kids were in your classes?

Q: I think that people are saying now that that is too big?

A: Well, the teachers do. But we just had one class in each grade. That’s how many graduated, just 33 not 133.

Q: Did you go away to school?

Q: What did you major in?

Q: Have you worked outside the home?

A: Yes, for a lot of years I worked as a secretary and bookkeeper at the high school in Cedar City. We went to Logan and I worked up at the college in the bacteriology department and also worked at the drive-in theater there. Anything we could do to make ends meet. Later I worked in the office at Grand County High School for a number of years. I worked for Dr. Munsey for fifteen years doing insurance. I substituted for a number of years at the schools.

Q: You have been busy and I noticed a clipping in the paper that you recently got an award for the Woman of the Year?

A: Yes, for Alpha Rho Sorority. I’ve belonged to that for 36 years.

Q: What is their main purpose?

A: It’s an education service organization. We raise money to help St Jude’s and other children, mostly children but we help other people, too. We donate a lot of money to help the St Jude’s Hospital for research for children.

Q: When did you find time to be a movie extra?

A: That was after I had graduated. I was working at the Arches Café, which is where the old Center Café was, right across from the telephone company. There was a big ball room and the café was on the side where Center Café was. While I was working there, the girl that was doing the doubling for Joanne Dru – her boyfriend was killed- so she didn’t want to work and so they asked me if I would. I was just there in the café, so I went.