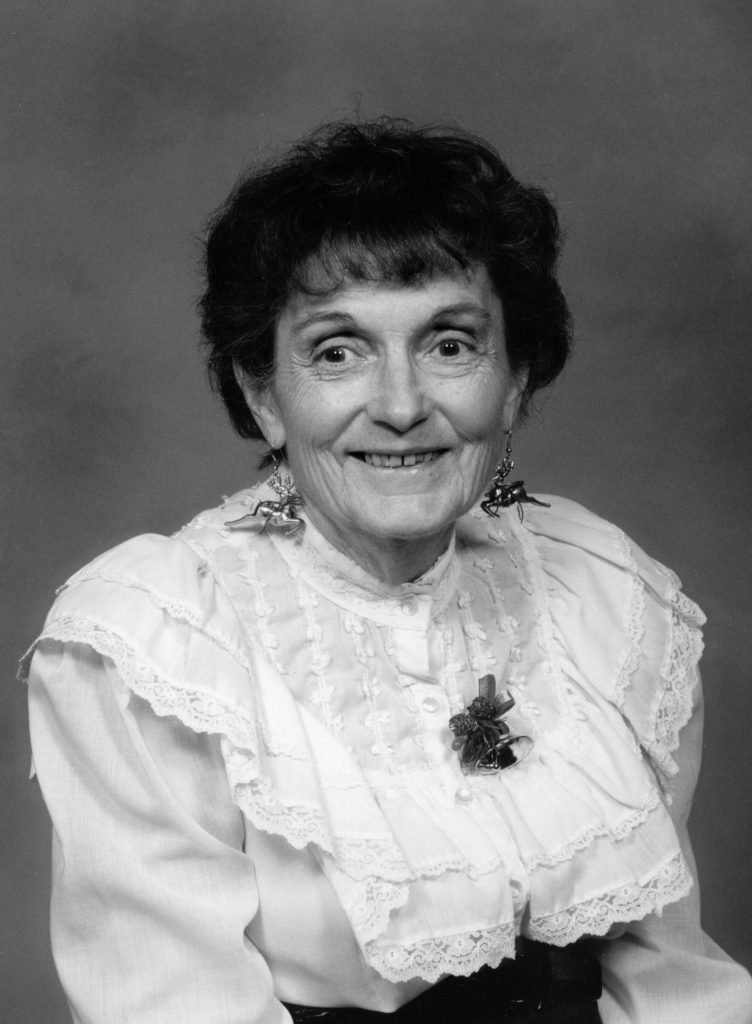 (Ferne’s two daughters, Mary McGann and Pat Mullen are also in attendance.) I will try to identify they as (Mary) and (Pat) during any question/answer period.

Q (Jean): So we’ve got two daughters here. We’ve got Mary McGann and Pat Mullen here. So, Ferne, tell me about yourself.   Where did you grow up?

A (Ferne): I grew up in Evergreen, Colorado.

A: Yes. My father was a farmer and road official. He worked for the county on the highway. They were both born in Colorado.   And, I lived there until I went to nurses training.

Q: Where did you go for nurses training?

Q: In Denver? So you took nurse’s training in Denver?

A: I did. I got married right after I graduated. And my husband ….

Daughter: What ? I thought you got married while you were in school.

A: I was through school but I had not taken my state boards yet.

Q: How did you meet your husband?

A: I knew him practically all my life.

Q: So, he was from Evergreen?

A: No, he lived in Denver but they had a summer place in Evergreen. And, we got married and right after we got married we moved to Climax, Colorado. He was a mining engineer.   I got a job in the hospital. We lived there for 13 years.

A: Yes. I had a son born there, and one child which died after birth. Then, after we left Climax, we moved to Nye, Montana, a copper mine. The reason we left Climax — we loved it up there but the altitude was over 12,000 feet and your blood thickens at that age. So,…

Q: Which age? You weren’t too old by then, were you?

A: I was in my 20’s and we were in Climax where he worked for a copper mine up there and I was their nurse on call. Because, I guess their insurance…

Q: So how was it living up in Climax?

A: In Climax? Winter, except for 2 months of summer.   We had July and August as summer. But we loved it.

Q: So you had one son up there?

A: And then we moved to Montana because of the altitude

A:   Copper Mountain up there.

A: No it was a town by then. Columbus was the largest town close to us. Between Butte and Billings. And my daughter Pat was born in Billings, Montana. The mine was closing down so we moved to Grand Junction because the uranium was just starting then and we got a house and lived in Grand Junction. My husband usually worked in Utah. He had a job and he had to work and we had weekends together.

Q: Did you say it was Grand Junction? Somewhere I got the idea it was 1957 when you came to Moab?

A: We moved to Grand Junction and then he was transferred from his job … what was the name of that mining outfit down below? … out by Hanksville?

A: Yes. So as soon as that mine was mined out, he came to work for Hidden Splendor.

Q: Oh, Hidden Splendor over on the Muddy?

A: Yes. So we moved here. He was transferred here and moved here and had to stay until we found housing because there wasn’t very much housing.

Q: So those were boom times?

Q: So what were boom times like? Where did you live?

A: The engineers…they had people they had houses for.

A: The company had houses on Mt. View Drive here in Moab. But there wasn’t an opening until somebody left. When they left, they’d only lived in it a few months.

A: Well, I’ll tell you. It was exciting.

Q: I forget the dates. Was Allen Memorial Hospital there?

A: The new one was. It had just been open a few years. I think it opened in, let’s see, I think it was David Allen that was the first baby born there.

A: So then I started working there. And we were so busy. They were building the mill and the mines were going. They had this building thing on. Building a railroad. Building houses and a grocery store. There was only one little grocery store run by a local, let’s see, Miller’s little grocery store. Down on the corner where that restaurant is now (northwest corner of Main and Center Streets). And, it had one street and it turned up past the Court House and wandered out toward Spanish Valley. They were building roads.

Q: Were most of the things you treated injuries or what? Babies?

A: A baby a day at one time. Sometimes, maybe we would have 2 or 3 but one day it ended up we had 30 births. And we were so busy because of all the construction that was going on.

A: Oh yes. Not necessarily the mine injuries but it was the people building the railroads and all those things and that was the busiest place and, of course, there had never been many nurses in Moab.