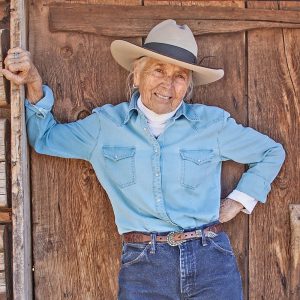 Heidi Redd is an accomplished adventurer: skydiving led her to ranching. She is credited with co-creating an innovative partnership between working ranches and land conservation organizations. In 1967, Redd and her then-husband Robert purchased the Indian Creek Cattle Company and historic Dugout Ranch near Canyonlands National Park. They ran cattle on 5,200 acres of land with 300,000 acres of grazing allotments. Redd partnered with The Nature Conservancy Utah Chapter in 1997 in order to preserve the ranch’s biodiversity and unspoiled red rock scenery, and in 2009 established the Canyonlands Research Center as a year-around outdoor laboratory for studying the region’s ecological health.

Rancher Heidi Redd says it takes a lot of 'stickety too' persistence to run a cattle ranch, then and now. 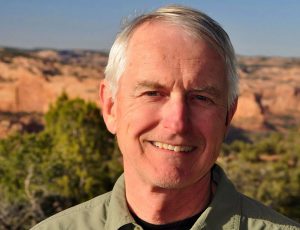 In 1976 Bill Hedden completed his Harvard Ph.D. in neurobiology and, with wife Eleanor Bliss, built a home in Castle Valley. Hedden worked as a river guide and as a cement finisher during the construction of the Atlas Mining Company mill. Because of Hedden’s scientific expertise, he became a citizen member of a Governor-appointed task force to study nuclear waste disposal, a Grand County Commissioner, and former Executive Director of the Grand Canyon Trust. Hedden actively worked to expand Arches National Park boundaries, clean up emissions from a coal-fired power plant, and to remove radioactive waste from the Colorado River.