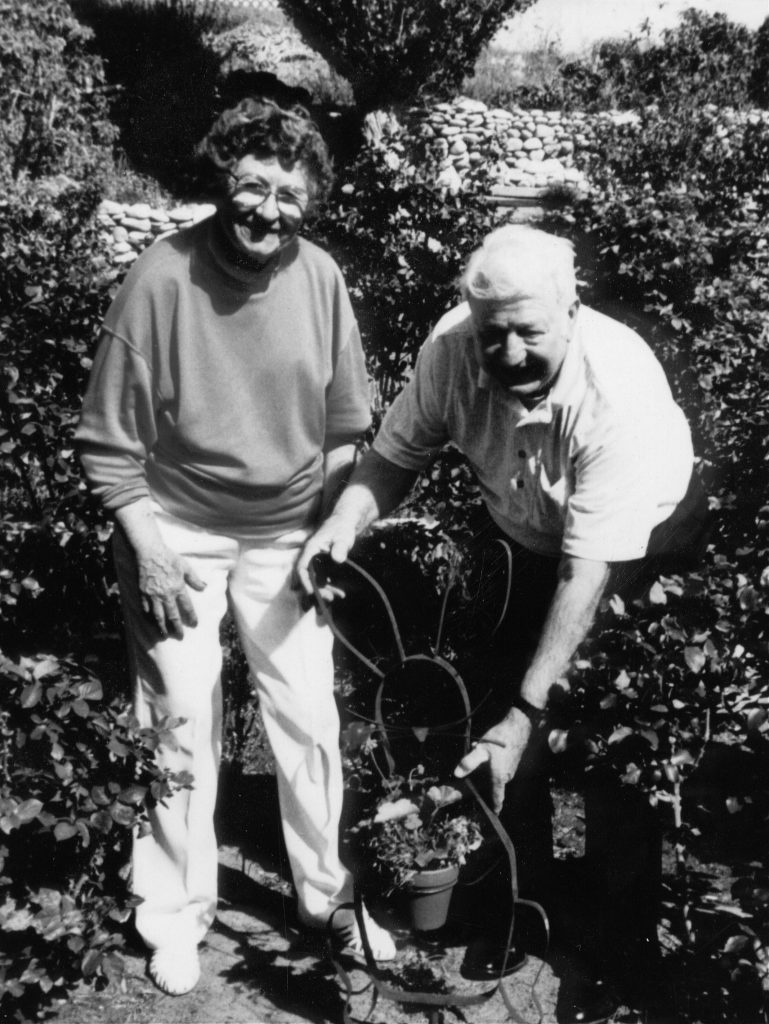 [A.K.] What year did you start at Arches?

[M.N. I went into the Park, I believe it was ’68 and I retired in ’85. But I worked at Canyonlands for a couple of years in the front office. I started in the mail room and from there went out to Arches.

[M.N.] There were only three of us there. There was an interpreter who’s name was Charlie Parkinson, and a District Ranger, Wayne Norton, in charge, and then we had a summer employee named Mikesell. Carl Mikesell was out there and he was the seasonal employee and very knowledgeable about the Park and the area and everything. All in all it was a great staff but we didn’t have near the visitation you have now. Dave Baker was in charge of maintenance.

I went by a few different titles. I ended up a Park Technician. I did the secretarial work and took care of the desk and did some interpretive writing. I did the museum and the library and the historic files and it was all just interlocked. Just made time for what you had to do. Sounds like I was the head but I wasn’t as busy as you might think because you could spread it all out and there was no staff to do these other things.

I had my desk in the front and I had that little window put in that maybe is still out there, so I could work at my desk and watch the door for when somebody would come in. Then I’d go out to the Visitor Center.

I’d go in the morning, open the place up, put up the flag and always somebody was waiting at the front door. Even in the winter, it seemed like we always had that early visitor. Get that taken care of and go back to the desk and start the day. Sometimes you got right back to your desk, but if it was busy, it would be the middle of the morning.

I did not go on searches. I did the radio for searches and it was one great experience. There is nothing more thrilling than “all is well” when they have found whoever they were looking for. One time they called me out at two o’clock in the morning, had me stop for 50 ham sandwiches, and we kept in touch with Park rangers by radio. Finally they called other people in – the Grand County posse, the sheriff’s posse, out to help. By this time Larry Reed was in charge and it happened to be the son of a Park ranger that was lost. I don’t think they wanted to find him any more than anybody else but it made it a little closer to the people because they knew his father. And when he tried to brief the posse, Larry would almost break down, just almost couldn’t talk, just so emotional. They were just ready to take off and they heard a helicopter outside the back door. They had called a helicopter at daylight to come in and help with the search. And the helicopter pilot had come in from the north and he saw some activity down below so he dipped down and this man was down there waving to him. So they set down and picked up the injured hiker who had made himself a crutch and had a broken leg and they brought him in and sat him right at the back door before the posse had a chance to go out. Well, that was a celebration. We all ate ham sandwiches for breakfast. I might add that a helicopter landing strip had been improvised and when the copter ignored it and landed at the Visitors’ Center, I said, “How do we expect him to find a lost hiker when he can’t even find the landing strip?” My face is still red.

That’s just an example of what goes on in a search, the emotion that goes into it and the know-how to get people out in the field. They almost always found them. Once in awhile there’d be a fatality but I don’t know that there was ever one involving a search. It’d be more like a heart attack on the trail or something. But they always got their man. We had a lot of happy endings out there.

A little boy was lost all night and that was really a traumatic experience. He disappeared and it was the Devil’s Garden hike and he’d gone the wrong direction. He was gone all night up until sometime in the morning and they found him. He must have been eight or nine, exploring, and he took a wrong turn which is very easy to do up there. And that was another happy ending. Finally he had found a ledge to sleep under all night. He was quite a hero after he got over being frightened and got something to eat and drink. He was pretty proud of himself.

At that time I think the Park Service had the town’s respect. It was a long-time thing. They had wanted the Monument so bad to become a Park and it was Arches, and they had wanted Canyonlands to become a National Park so it was sort of an elite group./ I was always proud to be part of it and never felt I had to apologize for being in the Park Service. I think it [ negative feelings toward the NPS] has a lot to do with the tightening up of regulations. We only used to charge a dollar entrance fee and that was the second living room for Moab when company would come. It always included the trip out to Arches.

In those days, law enforcement was really low key. They’d have somebody make a patrol a couple of times a day and, during busy weekends, we might have somebody stationed up at the campground. I’ll tell you a really funny story. For a couple of years in a row they had some kind of training class and they pulled off all the personnel they possibly could and just left a few in the Parks here. And, of course, Easter is the biggest weekend of the season at that time. So Carl Mikesell and I were left on duty and we were the only ones there that morning. So Carl came in and said, “Well, I’ll tell you what. You go on patrol, go up to the campground, see how it’s all doing and then you come back here and I’ll go up and you can take the desk.” That desk got to be real tiring with a hundred visitors in the building all the time. It was just a madhouse. So I went up to the campground. Of course, I didn’t have any law enforcement training and it was a madhouse. Every campground was full twice. There were people parked in the roads and it was a swarm of people and I didn’t know what to do. I knew we had to move some of them out but I just didn’t know where to start. So I radioed Carl and I said, “Carl, I don’t think I can handle this” and I gave him a little idea of what was up there. I Said, “I better come back and trade you places.” About that time, somebody came running up and said,“That boy’s got a gun down there. Can he shoot up here?” And I said, “My heavens, no!” So I went up to the other end of the campground and I called him and said “You can’t shoot that gun up here!” and that was my way of handling law enforcement. Anyway, I radioed Carl and he said “Well have him break the gun down and put it away. Don’t take it away from him. Play it low-key.” So I did that and then the boy said, “Can I shoot a bow and arrow?” so I told him no. And I looked around and there was a boy way on top of a high rock in the middle of the campground and I thought, “Oh, my word, he’s going to fall off!” So I got in my car and I headed back down as fast as I could go and Carl headed up there and got there just as a woman fell and broke her leg. That was the type of thing we had. We just switched roles and so I had the Visitor Center the rest of the day and was glad to have it, too.