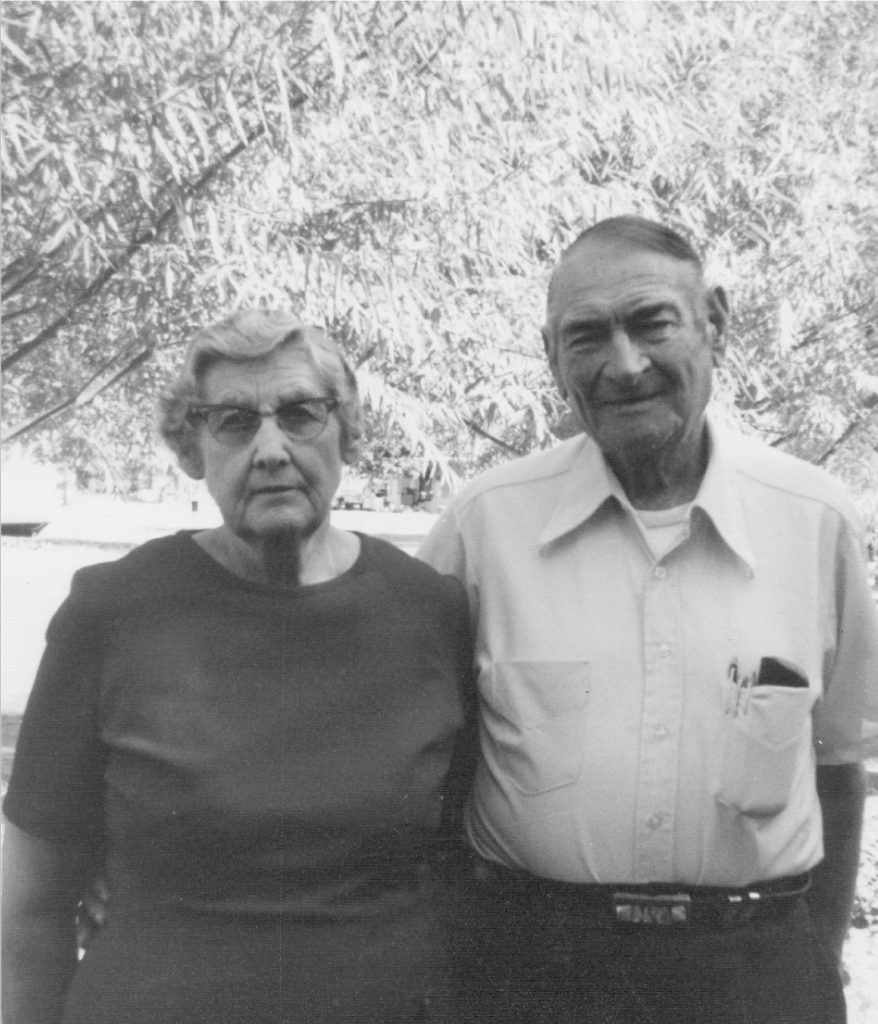 ABOUT THIS LIFE HISTORY

This history was written by Isabelle Provonsha about 1978 and a copy was bequeathed to Danial Provonsha’s wife, Lelis. This transcription is an exact copy of Lelis’s copy. It has not been edited for spelling and is assumed to be in the original form as written by Isabelle Provonsha; however, the original typist is unknown. This typed copy was done by Detta Dahl (Moab, Utah) on March 25, 2002.

Edd was born in Antigo, Wisconsin, and came west when he was 13 years old. The family settled in Orchard, Colorado. From there, they went to the Grand Junction area, where he met his wife, Isabella. About a year later, on Aug. 2, 1914, he came to La Sal. They were married Aug. 18, 1914, sixty-one and a half years ago. They lived at La Sal for a good many years. His father-in-law acquired the mail contract from Moab to Monticello in May 1915, to 1917. Three people handled the mail; first with horses, and light wagons. Then they got a Ford car, and later two Buick trucks. By 1918, he had cleared 100 acres sage- brush land with a grub hoe. Isabella would rake it into win rows with a team, and hay rake. We would burn it at night. The land was put into pasture and other crops. In 1919 to 1923, he leased the place and moved to Montrose, Colorado, where he sold Dodge cars for Hartman Brothers. They called him the Cowboy Salesman, because he wore a big black Stetson hat and boots. He sold more Dodge cars than any other salesman on the Western Slope of Colorado. He won two contests, one a trip to Denver with a cash prize, and the other a trip to Detroit where he met the Dodge head men, and also met Will Rogers. He and Rogers sang a song together.

We got homesick for the ranch at La Sal, and moved back. About 1928, he sold Ford cars with Charley Redd and did well. Then the Depression came, and we really saw hard times. Edd built a wood saw outfit. All the family worked on it, and once in a while a neighbor would help. There was very little money involved. A neighbor needed some dental work done. He had a cow and calf to trade, so Edd took the cow and calf. The dentist got a load of sawed wood, and the neighbor got his teeth fixed. In 1934, the Taylor Grazing Act became law. We managed to buy some old deserted farmland that had gone back to the county for taxes and a few cows. Then a man Edd knew in Price, had about 500 head of farm raised sheep that he didn’t know what to do with, so Edd bargained for them, shipped them to Thompson, and the boys drove them to La Sal. By the time they got them home, they weren’t quite sure if they wanted to go in the sheep business or not, but they stayed with them. In two or three years, the sheep were payed for out of the wool money. No papers were ever signed on this deal. Both sides kept their word.

Isabelle and the family looked after the ranch and stock. Edd was still selling cars, and spending some time on the ranch. Around 1938, Edd quit the car business and went into the LP gas. He had nine counties in Colorado, and two in Utah. He sold the first Butane and Propane gas, and all appliances in this county.

In 1945, we sold out at La Sal, and moved to Moab. We didn’t retire very long. We bought both the Pack Creek ranches and more cows. We kept the Moore ranches and our saddle horses, so we were back in business again. Edd built the LP Gas bulk plant in Price, and one here in Moab. Around 1947, or 48 we sold the Pack Creek outfit.

Edd bought the old Goudelock place, which is now the Greenwell. He remodeled the old house and built some cabins. When the uranium boom hit, we were kept busy. In 1954 Edd sold the gas business. A few years later he sold the motel and retired. He bought a travel trailer and did some traveling, and a lot of fishing. His main interest was the Lions’ Park. He enjoyed coming to the Park and talking to people from all over the country that were camped there.

My father was Daniel S. McCollum, and my mother, Helen M. Grimes. They were married in Paradox, Colorado, on January 13, 1893 or 1894. Between three and four years later on the 14th of December, 1897, eleven days before I was born, my father died; leaving Mother alone. Her sister, Bertha Grimes, came from Paradox to La Sal to be with mother. They came to Moab and stayed with a polygamist midwife until I was born. A month after I was born, they took me on my first horse back ride. We rode from Moab to Paradox, where their parents and family lived. We stayed over night at La Sal with Mr. and Mrs. Hyle Savage. We started the next day over the old Two Mile and Deep Creek Trail, in snow from a foot to 18 inches deep. My aunt used to say that when they reached the top of the Paradox hill, it was snowing, and I cried the four miles down the hill! She said she would have liked to have spanked me, but wasn’t sure I knew what was going on.

A year later, on January 13, 1898, Mother married Fred N. Prewer, and went back to La Sal to live. That is where I grew up. My stepfather loved me like I was his own. I wanted to go every place with him. He would carry me on his left arm, and the shovel on his right shoulder, when he would go to the field to irrigate. He would sit me down in a dry spot, and work not far from me. Sometimes I could barely see him by standing on my tip toes. I would think that he was a mile away, when he was only a few rods. When the water was tended, he would carry me back to the house. He loved horses and would trust me on his pet saddle horse to ride around in the yard, even when I could barely hang on. When I was four years old, I used to go to the Post Office with the letters, and get the mail. Which at that time was only first class, and carried on the back of the saddle behind the rider. I had two gates to open, and how I would have to work to get them open. Our saddle horses in those days were broke to sidle up to a gate for you to open it without the rider getting off. This horse was named Bracket, and he knew a lot more than I did. He would never go away and leave me. If I fell off, he would wait for me to find a way to climb back on.