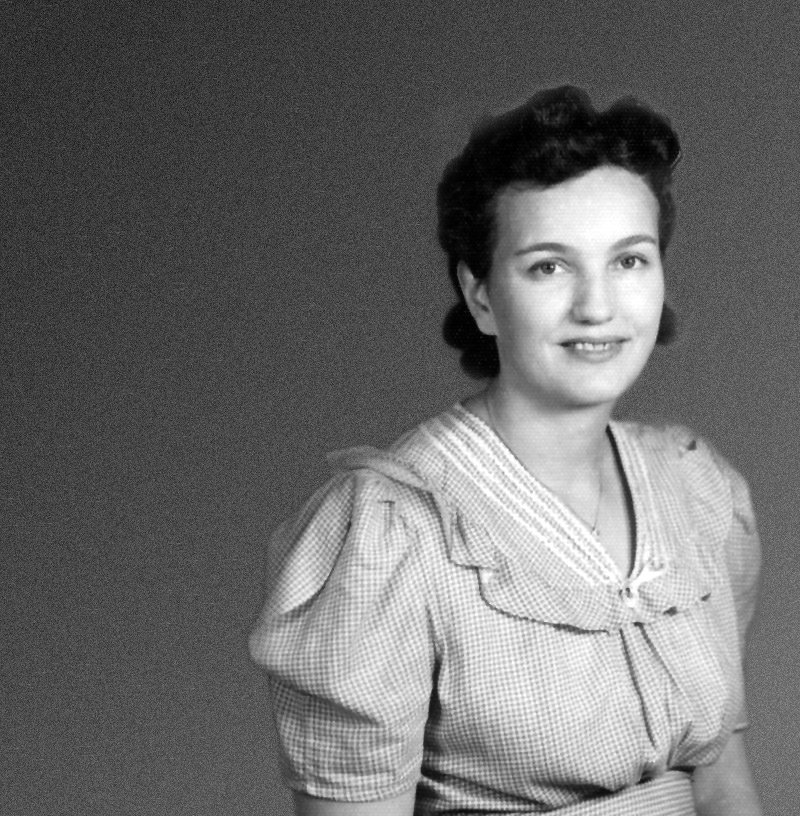 Carol: Well, I was born here in Moab, Utah, and my dad was out on the forest with his Forest Service work and they just told him that he was needed here at home. They didn’t tell him why. And I’d been born at that time.

Q: Did you have other brothers and sisters?

A: I had one, Tom Balsley, and he was 15 years younger. Mother said she didn’t like more than seventeen nor less than twelve, so she got two fifteen years apart.

Q: Did your dad travel a lot during this time period?

A: He did during the uranium. He didn’t so much before then. ‘Course he did travel quite a bit too when he was in the Forest Service. When he was at Monticello they used to get so much snow that it was just over the fence posts.

Q: Who were your friends ? Did you have a lot of friends in the neighborhood?

A: My dad gave this piece of ground right here where this motel is, he gave that to his friend Mellenthin. I guess you have the history of Mellenthin being killed up on the mountain? He was dad’s good friend and he gave him that piece of ground right there where the motel is because dad owned this property all this through here (indicated land surrounding her current home) and he gave that to them. I was the only girl in the bunch, everybody else was boys so we were real tomboys. I used to always be climbing trees. When I lived in this neighborhood as a little girl there were three boys on one side and two boys on the other side. We had this big barn like most of the places, two story barn where they had the hay, and the kids’d all go jump in the hay like we shouldn’t have done.

Q: Did they still have the big cottonwood trees on Main Street when you were a child and do you remember them cutting them down?

A: Yes I do. I sure miss that big tree up here that’s been gone a couple of years. They used to have town picnics up here in the area where the ostriches are. Do you know where they are? (indicating area on 4th East near Millcreek Drive and the current Grand Co. High school) They’d have town picnics for everybody in the whole valley would go up and they’d have games and they’d have their ice cream and everybody would turn the ice cream freezer. Everybody and their kids would go.

Q: Was there a park there?

A: Oh, just those big cottonwood trees and along the creek.

Q: What would they do at this picnic?

A: Oh, they’d have kid races and the men would do horse shoes. You know, all those things that are fun when you’re kids. On Memorial Days everybody took their little wagons and hoes and rakes and walked to the graveyard to clean up the graves. They did all that.

Q: Your mother is buried at the old Grand Valley?

Q: Did you have a farm? With farm animals?

A: We could have all that right here. There was an arroyo that ran right down through and a little stream. It’s hard to believe with it all filled in like that but we had ducks, and of course at that time everybody had a cow in their back yard , pigs and chickens, and we had all those and we had that little stream running down there and we could have those ducks.

Q: Were you responsible for taking care of the farm animals?

A: Some of them. We had chickens and milking the cow

Q: Do you remember any of your school things that were especially important to you as you were growing up? Teachers or events?

A: The school caught fire that one time and that was the biggest fire for everybody and everybody had to get the books out. And then what was really fun was we used to have the May Pole each year. The kids would braid the May Pole. I think kids miss that. And then they used to have dances for the children, a big barrel of lemonade and all the parents would come if they wanted to. We had it in the afternoon, the dance for the children. Other dances at night where whole families would go and that was nice. They’d dance with the little kids and the big kids.

Q: What was school like when you were a girl?

A: My graduating class was sixteen and we just did the usual things. I mentioned the maypole, went on hikes with the school, put on little plays, just the usual.

Q: What were your social events? Theater, Movie Show?

A: If you look outside in the patio and see this green bench right outside there? Well right over here, you know, it used to be called the Woodman Hall, right over here in this building on the corner? (Indicated building on corner of Center Street and First East) That’s where we had the show house and they had benches like that. All the kids and their buddies would sit on the benches like that at the picture show.

Q: How much did it cost to go to those picture shows?

A: I’ve forgotten, I really have. I used to get ice cream cones for a nickel. And we’d have a carnival come in once in awhile. Some of the kids would think that was fun, go down and spin the wheel.