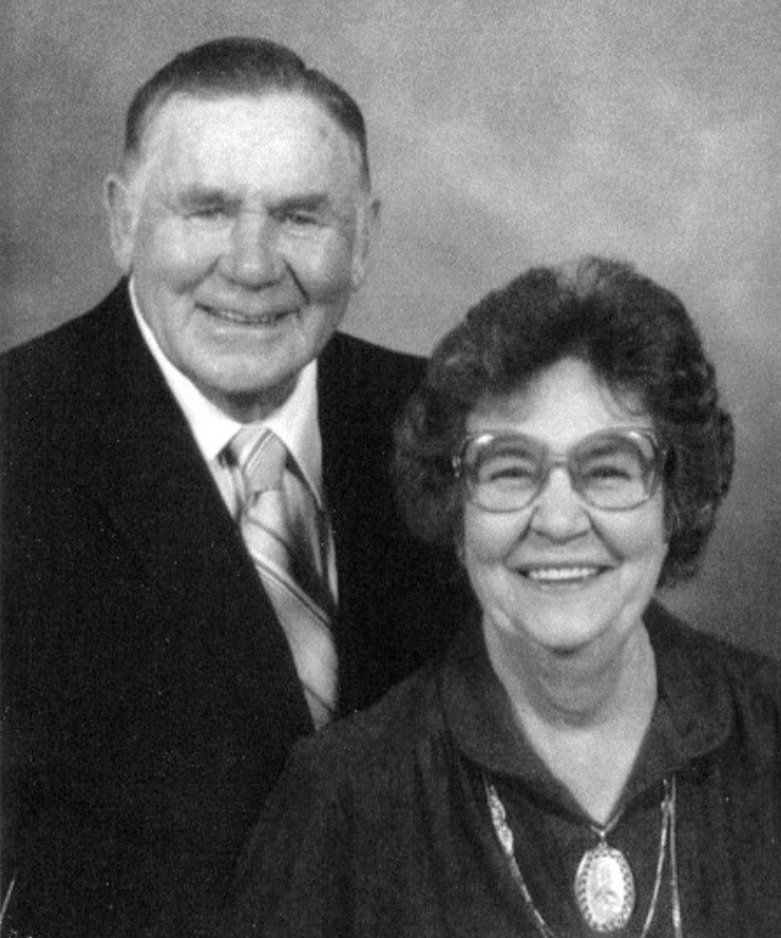 Arthur Lee Holloway was the twelfth child in a family of thirteen. The following story is told of how he received his nickname. When he was just three or four years old, following church services the family would gather with others at someone’s house where they would play music and socialize. Arthur Lee loved the banjo music and would copy the sound. Folks were soon calling him “Little Banjo.” When he started his first day of school, his mother wrote his real name, Arthur Lee, on a paper and put it in his pocket. Along the way he lost the piece of paper . Since everybody already knew him as Banjo, he was called Banjo from then on. The “Little” was dropped when he started school.

Banjo worked in the family sawmill and lumber yard in Wagoner, Oklahoma. He attended college and played football at Louisiana State University at Baton Rouge. In 1938-39 he played for the Green Bay Packers as center on offense and middle linebacker on defense. He arrived in Moab in 1942, an employee of Mack Drilling Company and Montezuma Lumber Company.

Since Banjo Holloway was a late comer to eastern Utah, this history deals primarily with the subject of oil, gas, and mineral drilling in the area and his business and work experience in this field.

Q: What was your mother’s maiden name?

A: Williams. Mary Elizabeth Williams’ grandfather was the first white man in Moab. Ezekiel Williams was his name. Zeke was everywhere with a party of seventeen trappers who trekked into what is now Yellowstone. The Indians killed all but three of them. He, a guy named Spencer, and one named Workman came down the Colorado River. They saw this crossing down here and knew a lot of people had been crossing it. So they got out there and started for what they thought was Santa Fe. That is where they were trying to get to. ‘Course they kinda wintered up down here in this valley. Then, when they started towards Santa Fe, they met this caravan that came through in the spring. Workman and Spencer turned around and went with the caravan, but he (Zeke) went on down the Arkansas and got out at what is now Sand Springs, Oklahoma. He walked back across to St. Louis, formed another company, went back to Yellowstone and got his furs. Her father was also named Ezekiel Williams.

Q: When did you start working in the oil and gas industry?

A: Oh I started a long time ago, when I was just a kid.

A: Yeah. That was in Oklahoma. I started firing boilers for him when I was about nineteen years old. Then the sawmills, rigs, and all, had steam and boilers that made the power. You used wood. After we got natural gas we used to fire ‘em but those old wildcat wells were all wood.   There was a lot of wood around where I was raised. Around Wagoner, the Arkansa, Verdigris, Grand, and Illinois (rivers) all come together there pretty close so it’s all pretty well-timbered area. Now it’s all water, the lakes.

Q: So how old were you when you came to Moab and who were you working for then?

A: I was about twenty-six and was working for Mack Drilling Company. It wasn’t too big. There were a lot of little drilling companies then. You might add in that I’m the only one left alive that come up here with that rig. That’s counting the workers’ kids and all that come up. ‘Course there was only two kids that moved up with us. There were about forty people in the outfit that come up here. We were drilling at Crescent Junction. We were using diesel in the boilers and butane.

Q: I read a little bit to try to learn something (about drilling). I read a book that was put out by San Juan County on Dick Wing and George Wing who both did oil drilling down at Mexican Hat. Has it changed a lot, other than how the drilling all works?

A: Oh yeah. Say, talking about Mexican Hat, and a boy that I went to grade school with. I still have one of them old folded paper bells that the kids made and drew names on in school for other kids. He owns property in Mexican Hat now, that the old wells are on. I didn’t know that until just a few years ago. I had lost complete track of it. It’s a funny thing. After my mother died, my sister was going through a bunch of things there at the house. She sent me this old paper bell that Billy had given me for a Christmas present, at the Christmas tree at the school house, way back in grade school days.

Q: Shirley said that you had a really neat calendar that had all this. Oh, Farmington, New Mexico.

Q: Oh really? I go out there and see some of these things and I always wish I understood how it all happens. Did it take a long time to drill really far down in the ground? Did you work on it for a few hours, or did you work on the same hole for a few days or weeks?

A: This well out here at McElmo Canyon, out of Cortez, I sputtered it on my birthday one year (December) and finished it up on my birthday the next year. I worked with quite a character out of Aztec, New Mexico, Tupper (?) Greer. I knew him really well. He got to be State Representative and so was his son after him. He was the oil and gas man there for several years. There’s the old boy that discovered the Rattlesnake Field there at Shiprock. This is what one of them old cable rigs looked like.