Howard Balsley: A Life on Paper 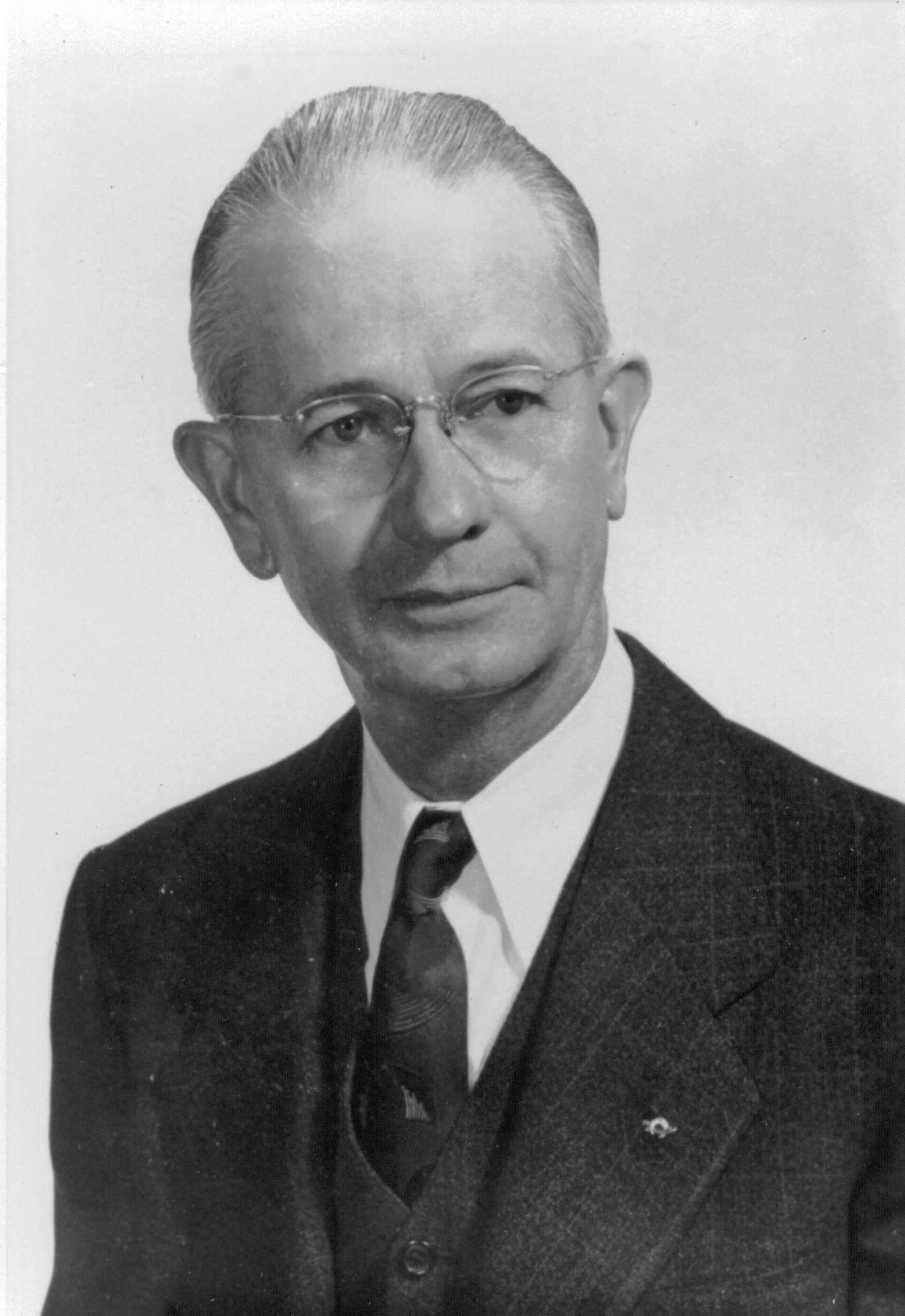 “I had not been in the West very long until I was bitten by the ‘mining bug’ and it seems that once one is bitten he never fully recovers from the ailment.”

There are so many reasons Howard Balsley was Moab’s very first Citizen of the Year and one of the only non-Coloradoans to be named Colorado Mining Association’s Man of the Year. Howard’s understanding of the “miracle mineral” uranium helped make southeastern Utah the “Uranium Capital of America.” With business savvy and political acumen, he promoted the Colorado Plateau’s mineral resources in Washington D.C. and championed the interests of the prospectors and independent miners scattered around the region.

Howard Balsley may have been a “citizen of the world” but he was a proud Moab resident. He served as Grand County Clerk and Auditor and was elected Moab’s Mayor, though as a civil service employee he was prohibited from serving. He also served on the Grand County Education Board and Library Board and was an active member of many civic organizations and his church.

Long before email and social media made people-to-people communication so easy, people corresponded in handwritten letters or typewritten correspondence – and the correspondence Howard collected throughout his life reveals deep friendships, long-lasting business partnerships, and a keen sense of humor.

This special exhibit is possible only because Howard Balsley was a fastidious chronicler of Moab’s economic, civic, and history, and through the generosity of Lily Ann Balsley, Howard’s daughter-in-law and Tom Balsley, Howard’s grandson.

Note: Images will enlarge when clicked 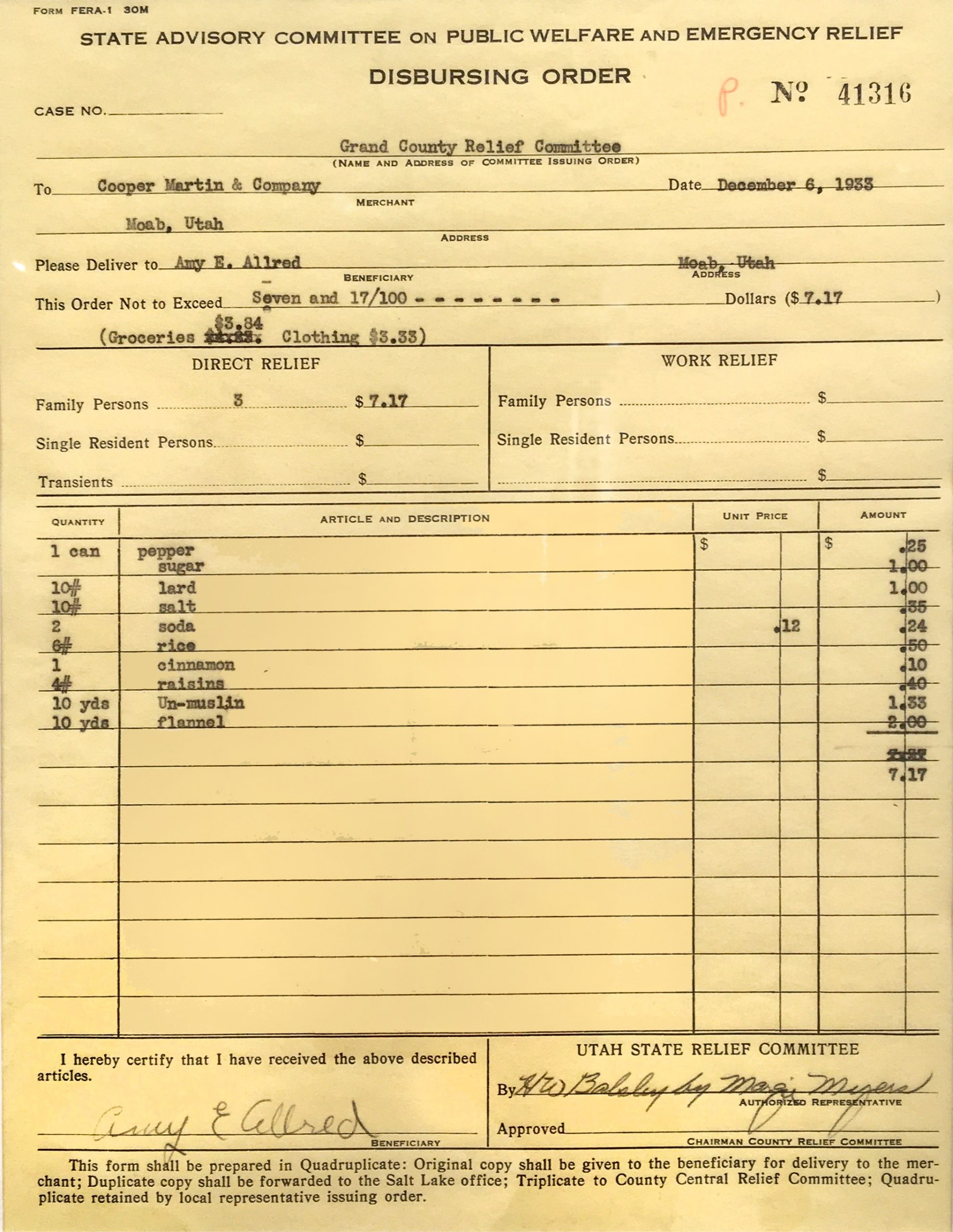 During the Depression, Howard Balsley was appointed to serve as the local representative of the Utah State Advisory Committee on Public Welfare and Emergency Relief. These authorized Disbursing Orders served as letters of credit to pay area businesses for the groceries, clothing and household goods needed by local families.

Commitment to community and industry

Given the time required to build successful businesses and maintain an extensive network of customers and suppliers, it’s hard to imagine how Howard could be so involved in so many community organizations. This sampling of membership cards demonstrates his active role in promoting the mining industry and building a community in Moab. Note the early Moab Museum membership card! 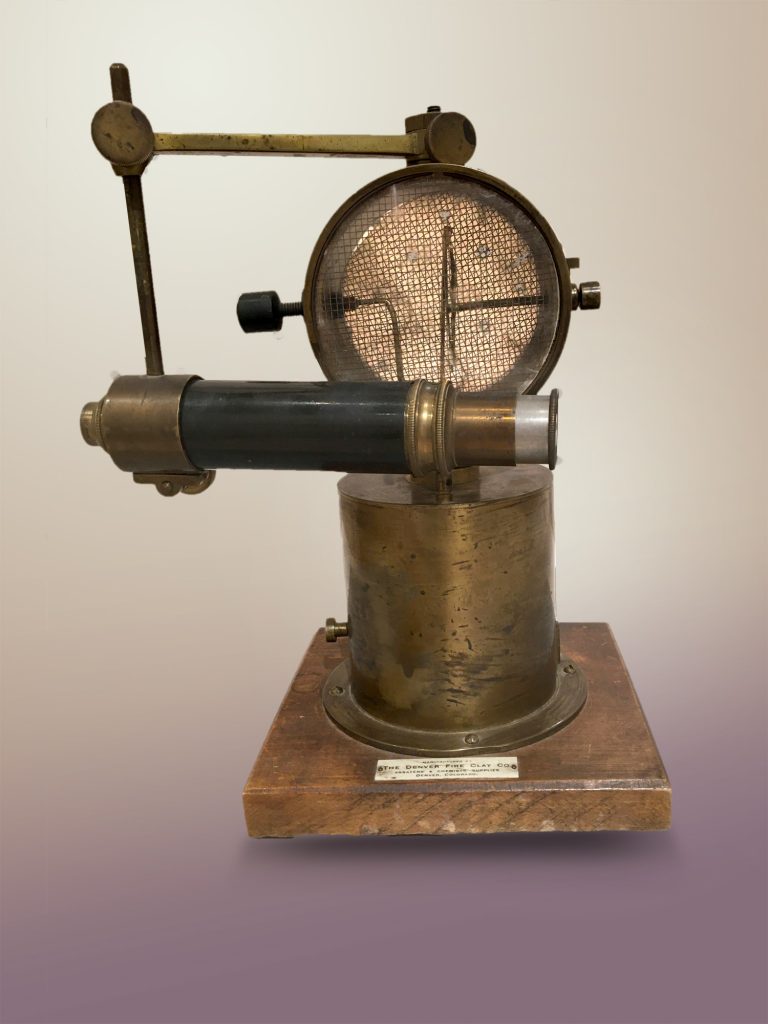 In 1934 Howard entered into a contract with the Vitro Manufacturing Company in Pittsburgh, Pennsylvania, to supply uranium ore containing a minimum 0.015 uranium oxide and 0.05 vanadium. Because Howard was sending ore to Pittsburgh in 50-ton railcars, and each load contained ore with varying amounts of uranium and vanadium, precise measurement was critical. To expedite the process, Howard purchased this electroscope because it was more accurate in determining the grade of uranium ore than the Geiger counter, allowing him to estimate the amount of vanadium.
Donated by Howard Balsley 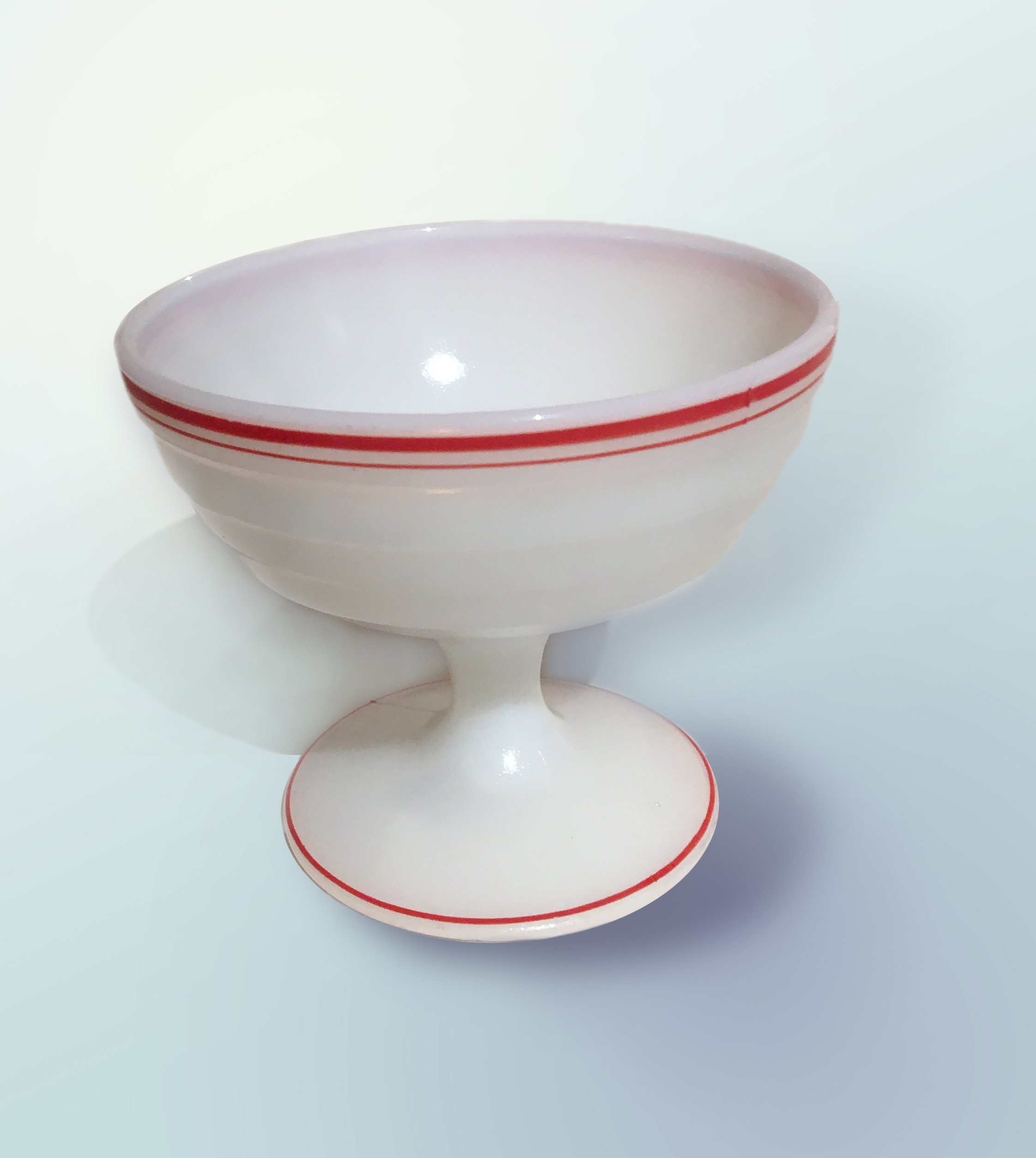 For almost 150 years after its discovery in 1789, uranium was used primarily as a coloring agent for glass and ceramic glazes in shades ranging from tallow-green to orange and red. This piece of dinnerware is made of milky glass decorated with painted red lines made from uranium, and was donated to the Museum by Howard Balsley. 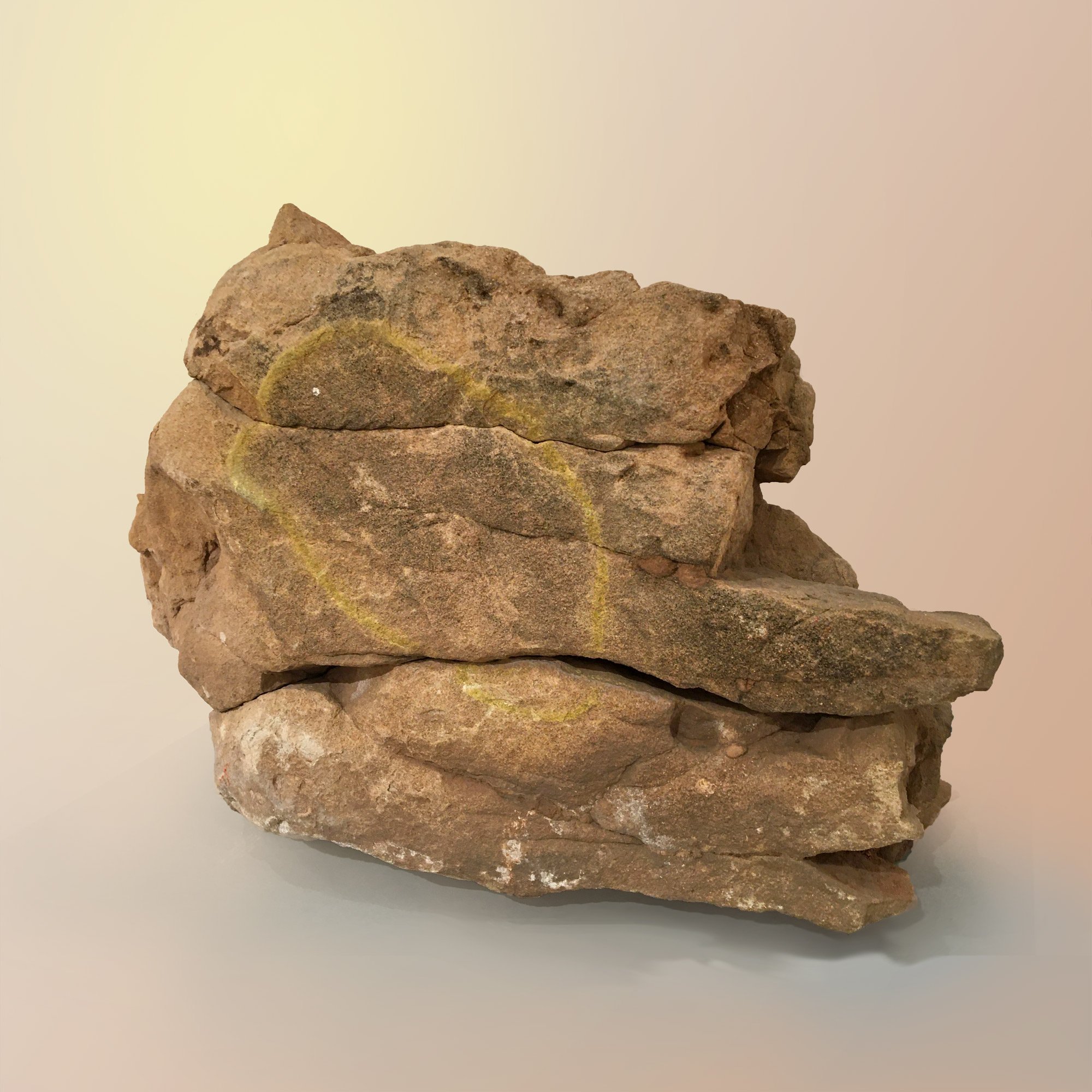 Howard Balsley was the go-to guy in Utah when someone had a hunch about where to find the next big uranium-bearing ore. He would grubstake uranium prospectors, providing up-front funds for food, supplies, and tools making him the region’s most prominent investor. Cowboy-turned-prospector Charlie Snell asked Howard to grubstake him after a dream told him he’d find uranium in a yellow circle in a block of sandstone. Howard’s money and Charlie’s dream became the Yellow Circle Mine, producing more than $1 million in uranium-bearing ore. 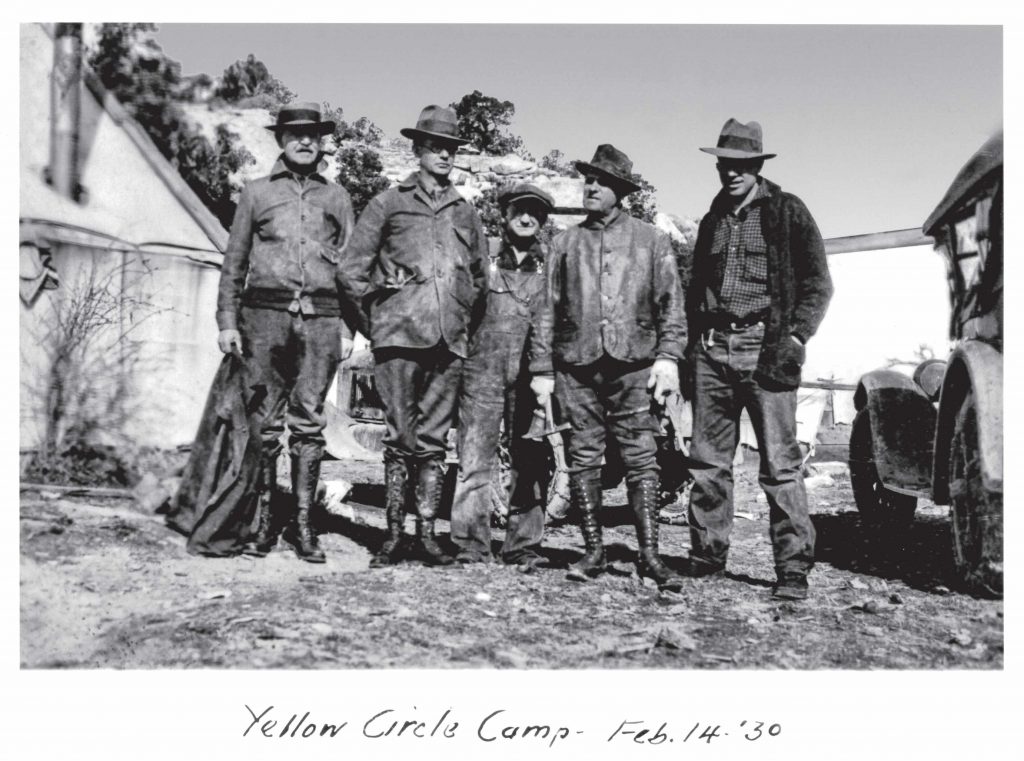 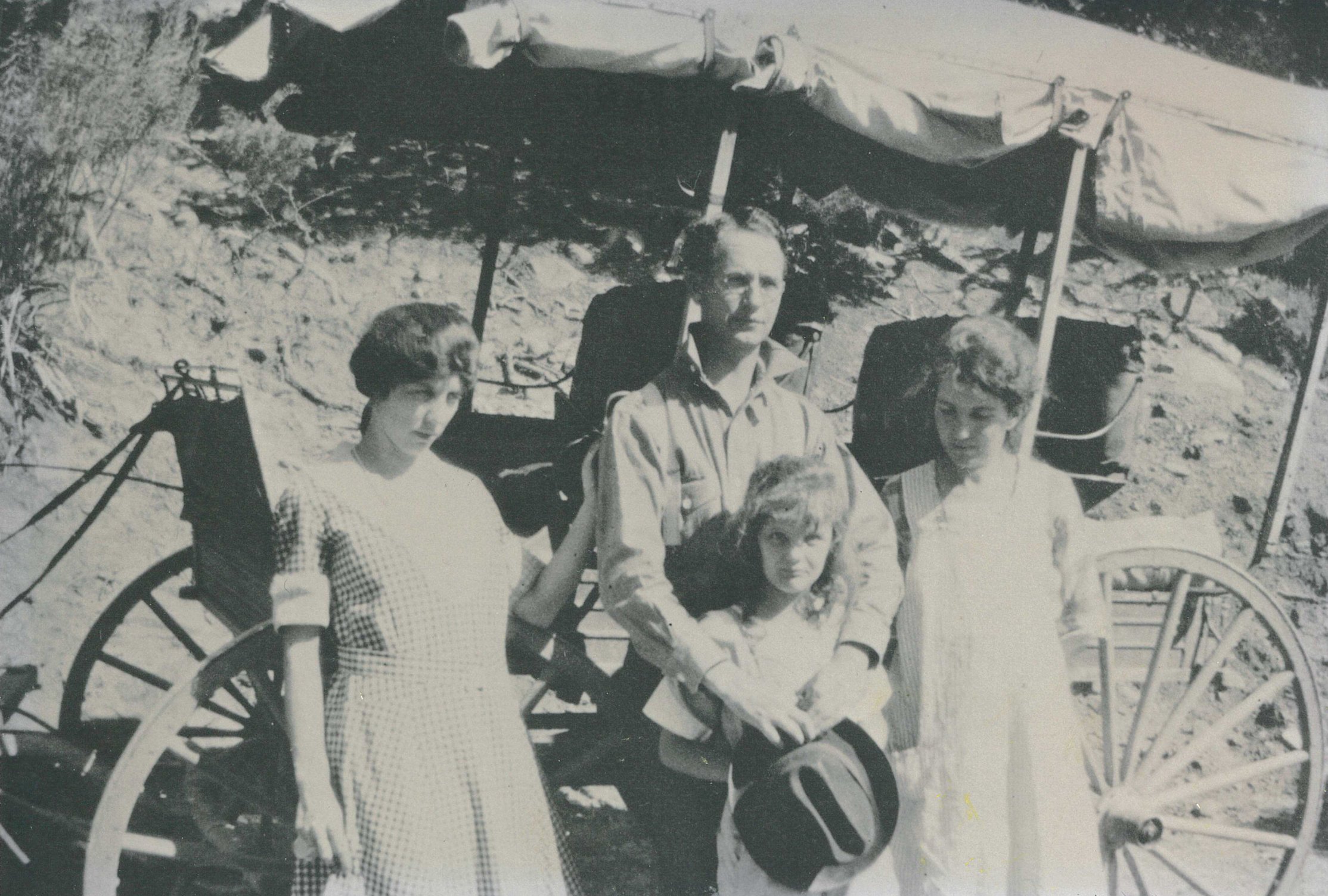 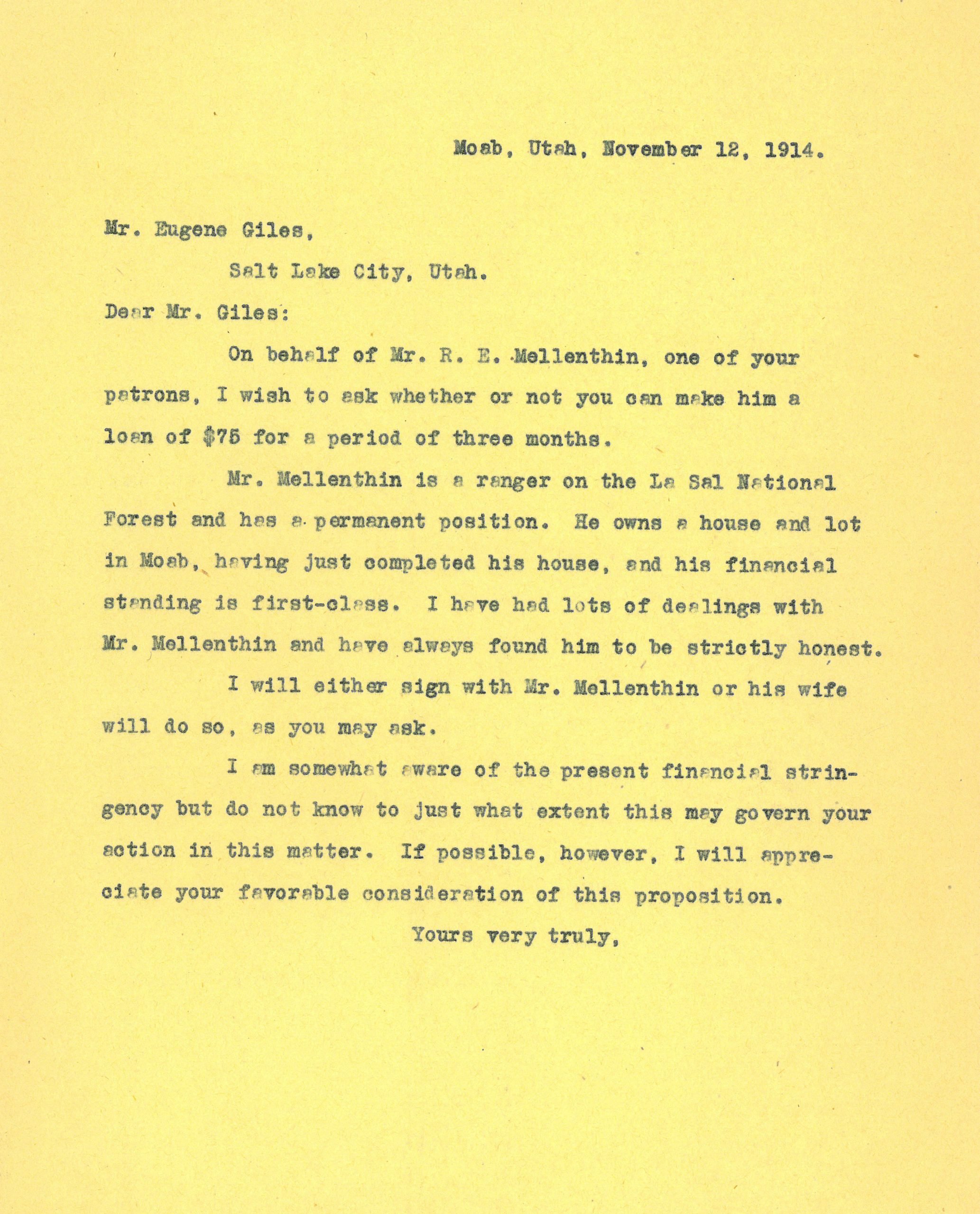 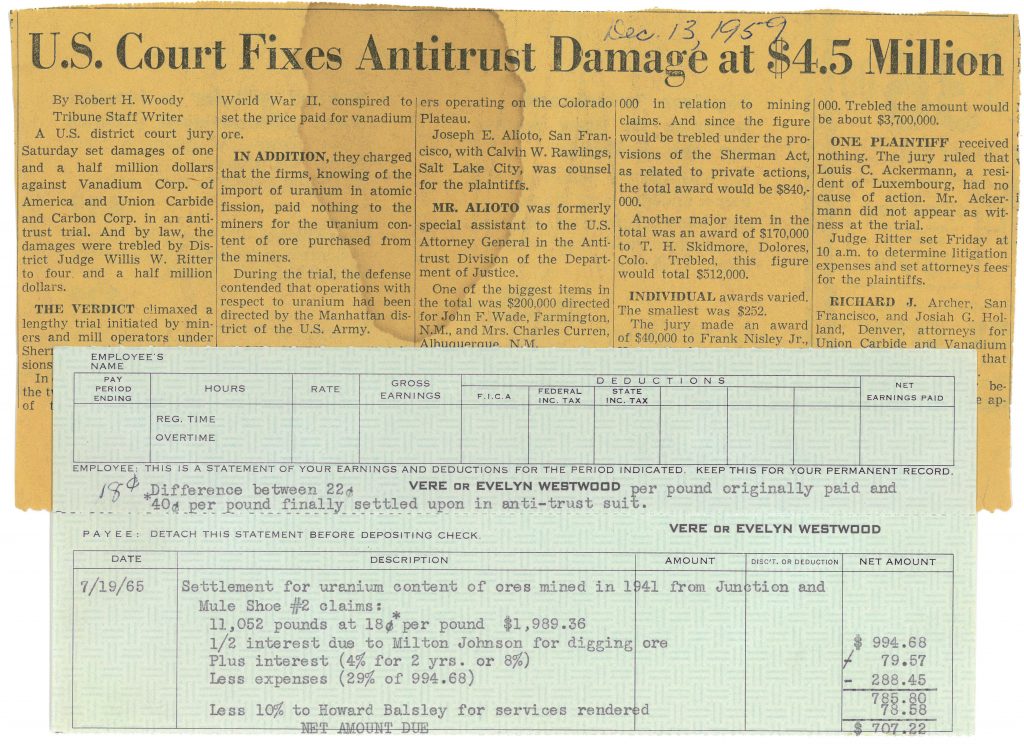 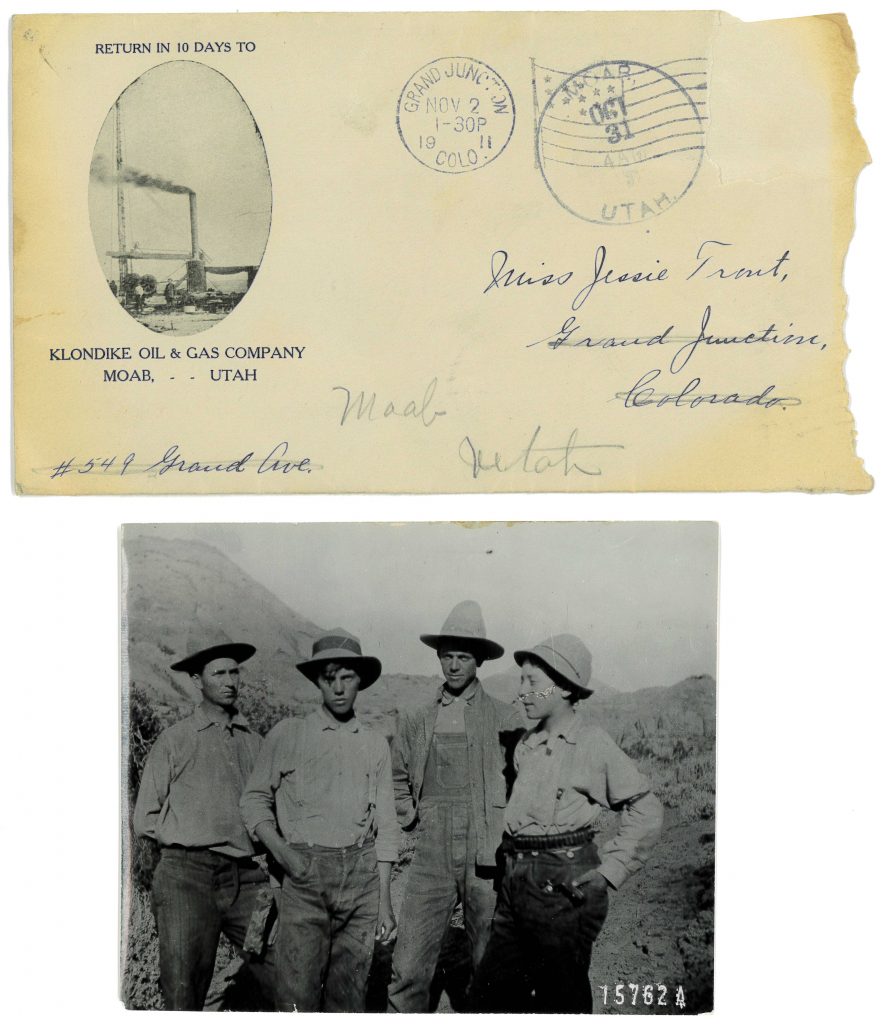 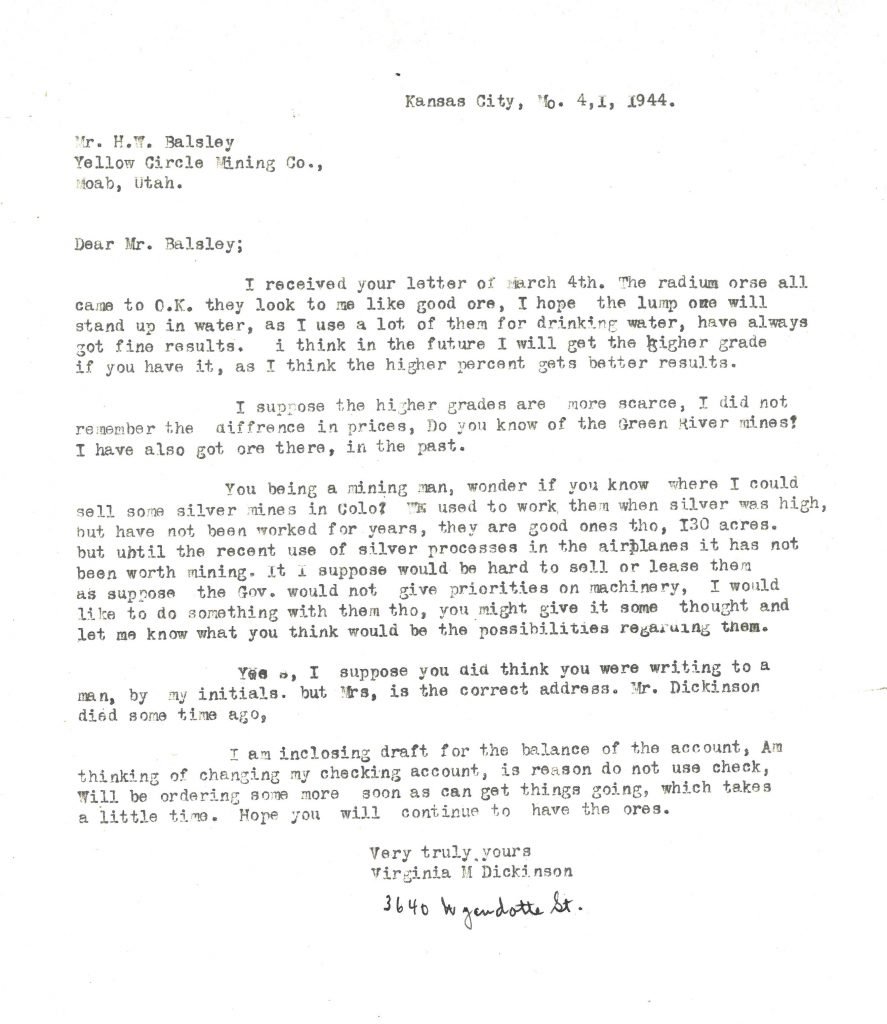 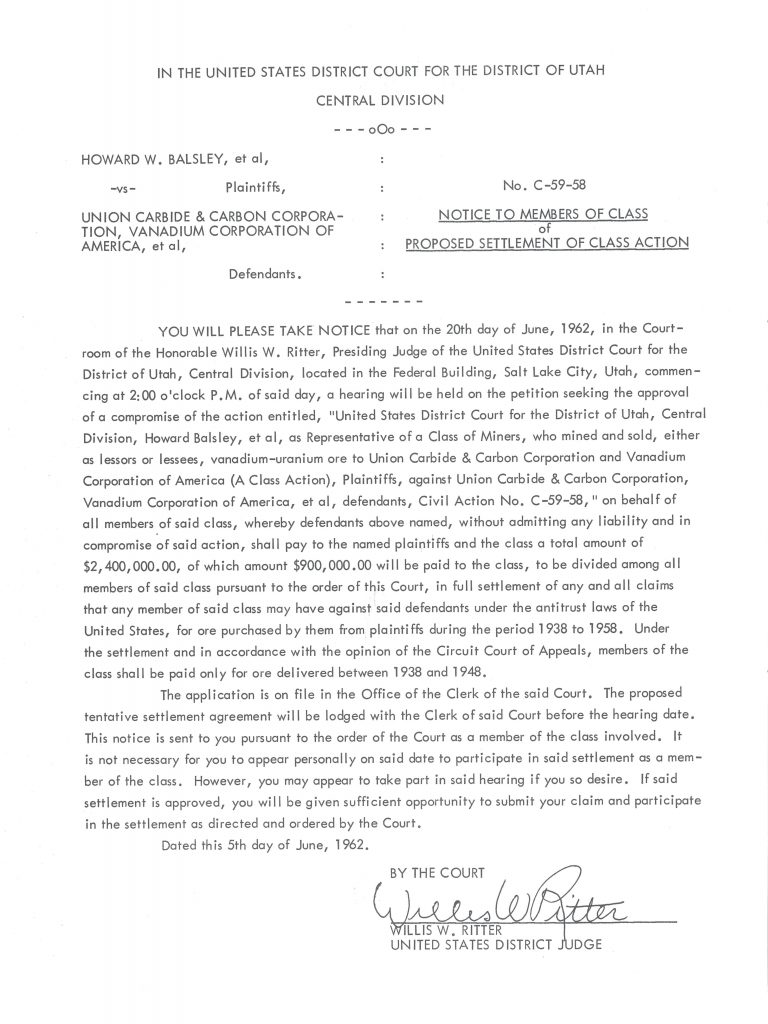 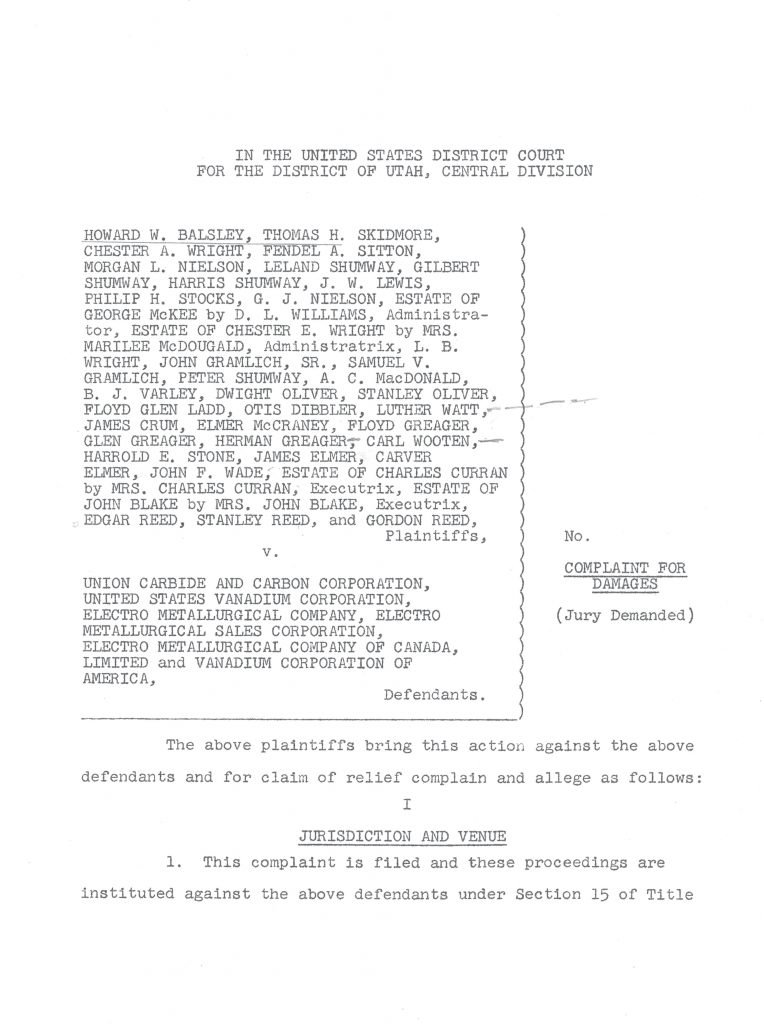 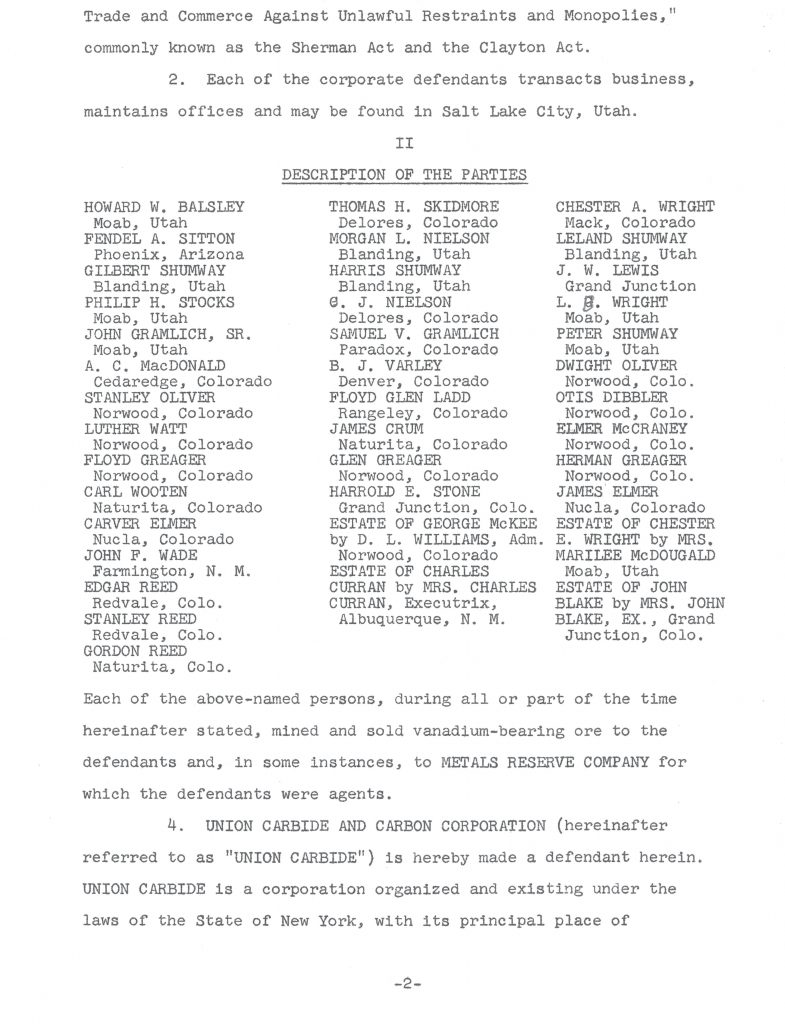